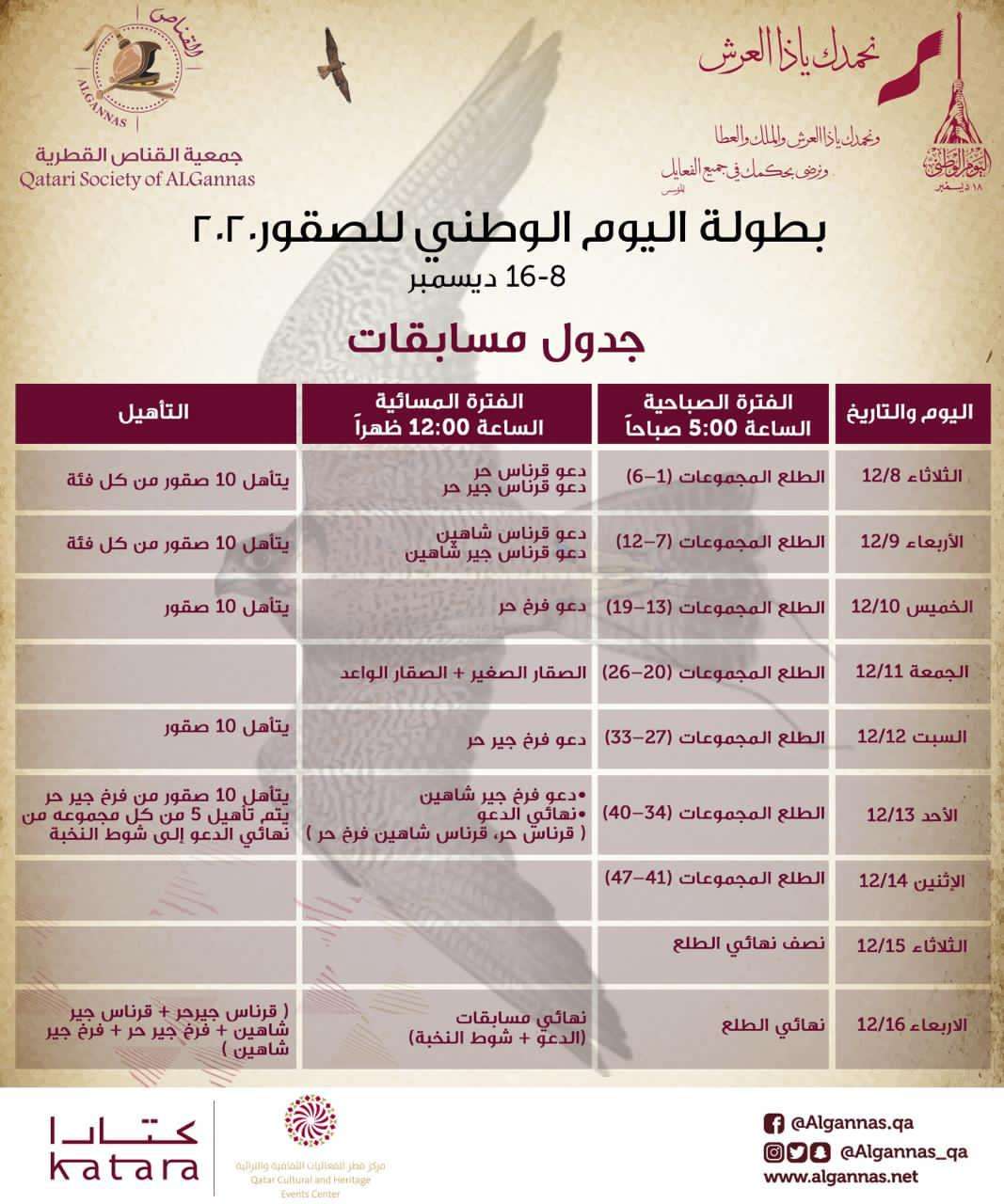 Following the registration process, on the 3rd, 4th and 5th of this December, and then inspecting the falcons at the office of the Qatar Society of Al Gannas last Sunday, the Qatar National Day Falconry Championship 2020 will start on Tuesday, December 8, and will continue until the 16th of this month, with many falconers taking part in the event..

The Qatar National Day Falconry Championship (QNDFC) is one of the most important tournaments organized by the Qatar Society of Al Gannas, with the support of the State National Day Celebrations Organizing Committee (SNDCOC) and under the supervision of the Qatar Center for Cultural and Heritage Events.

The vision of the Qatar National Day (QND) is based on promoting loyalty, solidarity, unity and pride in the Qatari national identity. The operative slogan for this year’s QND is: “We praise you, O Lord of the Throne,” a line quoted from one of the poems by the founder Sheikh Jassim bin Muhammad bin Thani.

The QNDFC is a special way to celebrate the Qatar National Day, which falls on December 18 every year. It is also an opportunity for falconers to prepare for upcoming tournaments and festivals, the most important of which is the International Marmi Festival.

Ali Bin Khatam Al-Mahshadi, Chairman of the Board of Directors of the Qatar Society of Al Gannas, said: “We are proud to organize this exceptional tournament to bring joy and celebration to the Qatar National Day. These days remind us of what our ancestors did for this country, and for the Qataris gathered under the banner of the nation.”

He added that falconry is a source of pride for Qataris. It has become a global legacy that it was registered on the UNESCO list.

Mr Al-Mahshadi also pointed out that after counting the number of registrants, a lottery will be conducted for the participants and published at a later time.

On this occasion, the President of the Qatar Society of Al Gannas extended his thanks to the Katara Cultural Village Foundation and other partners, including the SNDCOC and the Qatar Center for Cultural and Heritage Events (QCHEC).