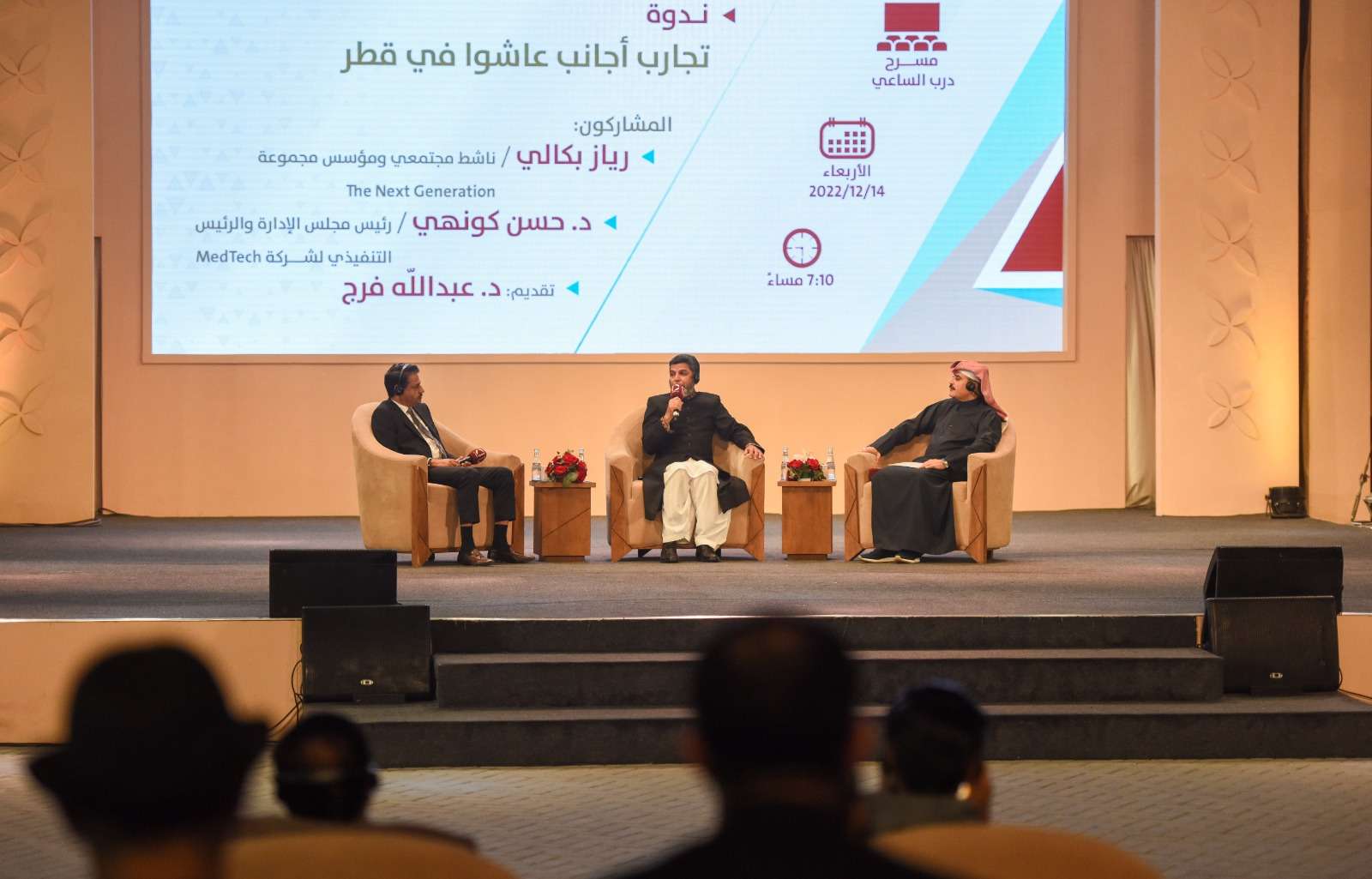 Given the diversity and richness of the experiences of residents in the State of Qatar, the National Day Organizing Committee was keen to shed light on them in order to inspire the Qatari community and residents, preserve the positives and overcome the negatives, as the main theatre at Darb Al-Saai witnessed the holding of a new seminar entitled “Experiences of Foreigners Who Lived in Qatar” as part of the activities of the Qatar National Day 2022.

Mr. Riad Bakali, community activist and founder of the group “The Next Generation” and Hassan Conhi, Chairman and CEO of Med Tech, participated in the symposium presented by the media and writer Dr. Abdullah Faraj Al-Marzouki.

Dr. Marzouki introduced the two guests, their experiences in Qatar and their efforts to achieve the construction and development of the State.

Dr. Abdullah Faraj confirmed that the State of Qatar is keen to open up to different cultures and promote them to communicate among the world’s peoples, especially the different nationalities that reside on its territory.

On his part, Dr. Hassan Conhi shed light on the security and stability offered by the State of Qatar to its people and its evident characteristics of peace and tolerance, commending the State of Qatar and its wise leadership and people for their efforts in this regard saying: “Thanks to Qatar’s facilities, a high-education school has been established, from which generations of several nationalities had graduated.

We are proud to offer a distinctive level of education to about 38 nationalities, so we are the only Indian school in Qatar that offers its curricula to all nationalities, not just to Indian nationals”.

He continued: “The Ministry of Education and Higher Education has given us great support, based on Qatar’s outstanding level of education”. He also noted that his stay in Qatar was a source of great and lasting happiness, praising the international atmosphere that reflects Qatar’s success in this exceptional edition of the FIFA World Cup Qatar 2022.

Mr. Ryabkali said that security and peace in the State of Qatar were unmatched in the world and that he and his family are touching this as they reisde in Qatar.

He also said “ it does not only stop here, but it goes beyond other advanced aspects of Qatar’s development, at various levels and areas, including education, health, social aspects, and the extraordinary infrastructure that the country now enjoys.

The State of Qatar had been able to achieve all this progress and development within a short period of time and with an interest in supporting and caring for its citizens, the country had also not lost sight of the care of residents. The care had been extended to tourists arriving in Qatar, reflecting the fact that Qatar is indeed a special tourist destination for all visitors from all countries of the world