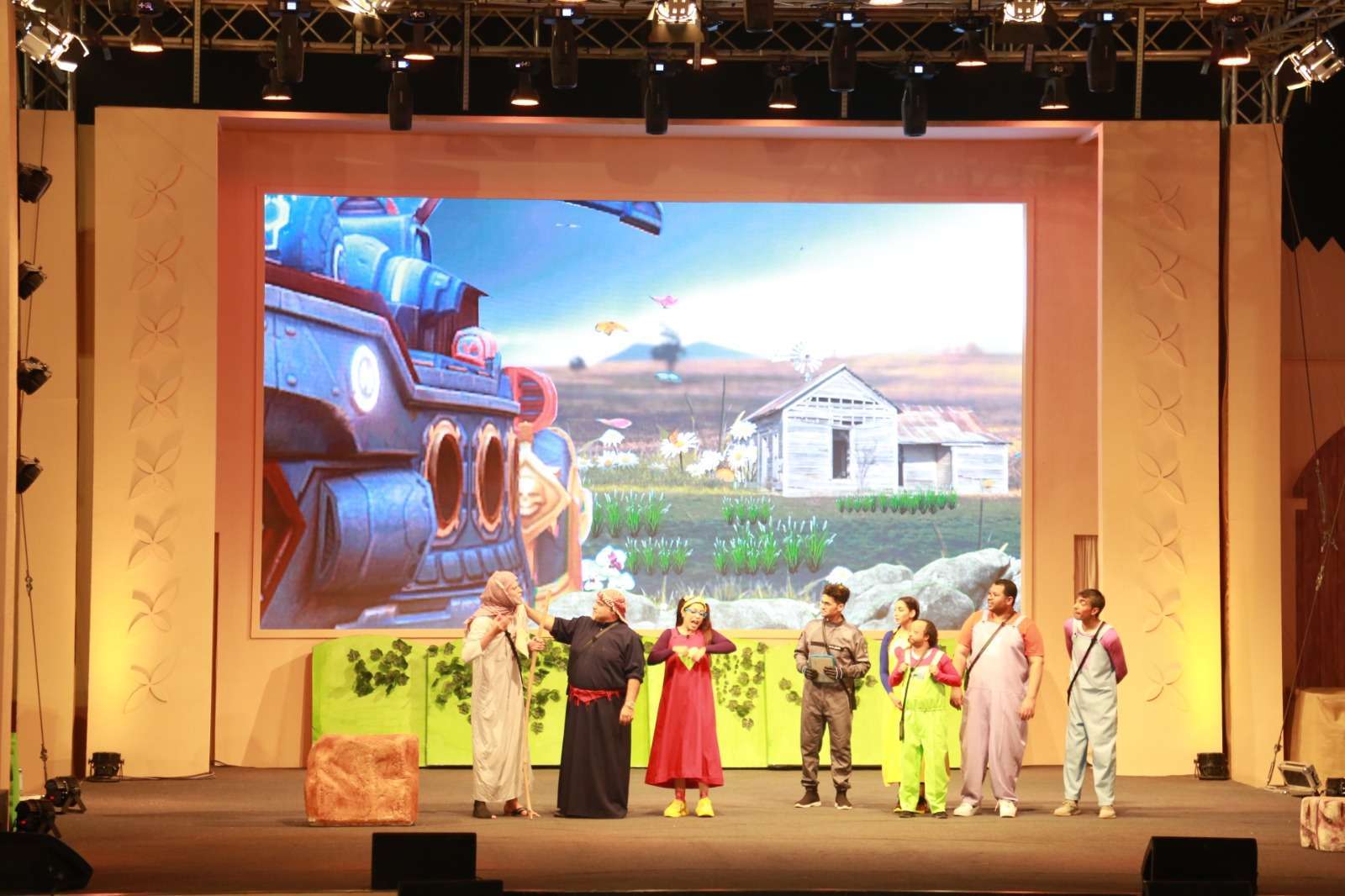 Darb Al-Saai witnessed a number of various theatrical performances presented by the Center for Theater Affairs yesterday, and they varied between puppet theater with its different tools, as well as theater activities that target the family and children, in addition to traditional drama and operetta show that inspired by heritage, while a space was allocated for puppet-making workshops to engage the children and make them interact with the techniques of this theatrical form.

The play ” The World 2030″ has achieved a great turnout by the visitors of Darb Al-Saai, and it is the play directed by Hanan Sadiq and written by Maha Hamid and starring a group of distinguished artists. The story of the play revolve around the vision of Qatar 2030 in a way that suits children that convey a number of messages, the most important of which is the adherance to dreams and hard work that leads a person to achieve his/her goals.

In press statements on the sidelines of the show, actress Hanan Sadiq expressed her happiness at presenting a show for children during the National Day celebrations, and indicated that the show is directed to the entire family, even if it targets the child in particular. She emphasized that her participation in this theatrical work in Darb Al-Saai activities has allowed her and her friends of artists to be present among a large number of audiences of all groups, along with the fans of the World Cup. She said that the work tells about a group of children who are taken on a journey through time, this journey teaches them many lessons, the most important of which is self-belief and the need to work and make efforts in all fields to achieve our dreams, stressing that these ideas are passed on to children in a beautiful artistic way that relies on indirect manner, through events that are displayed on the screen and contribute to enhancing the imagination of the children.

The theatrical show “The World Cup Journey” presented by the Puppet Space Troupe, within the activities of the theater, was able to create an interesting festive vibes and a turnout from children and their families. Samar Daher, Puppet Maker, said that the play of “The World Cup Journey”  reflects the journey of fans until reaching the stadium to watch the match, and when they get there it appears that they got tickets by mistake, to show that the puppet maker is the one who got the correct tickets to attend the World Cup. This work combines the actor with the puppets, and provides an educational, awareness and entertainment message to the children, so that they get to know the use of dolls.

By relying on the heritage, Darb Al-Saai witnessed the presentation of a number of artistic paintings that belong to the Qatari heritage, which were directed by the artist Ibrahim Lari, relying on the creativity of the musician Matar Al-Kuwari, the choreography of Noura Al-Hajri, the arrangement of the music of Muhammad Al-Marri, and the clothes of Aisha Al-Nuaimi. The work documents some of the heritage paintings from the legacy of childhood, which were developed and wrote their poems by Tayseer Abdullah, Abdul Rahim Al-Siddiqi, and the work presented by the Center for Theater Affairs in celebration of the National Day, produced by the Cultural and Heritage Events Center, during which a number of children were hired to implement it.

The Puppet Space Band presented a series of workshops targeting children from 3 to 14 years old, which is a group of different puppets, from hand puppets to finger puppets and stick puppets, according to the age group, as the Theater Affairs Center was keen to teach the child the mechanisms of moving puppets. By choosing the right things from the environment.

The theater program in the Darb Al-Saai activities included a group of distinguished works of art, the most prominent of which is the play “Al-Ghabba” written by Talib Al-Dous and directed by Nasser Abdel-Ridha, starring a group of artists. In addition to the two of operetta shows, the first entitled “The Flag Story” that tackles the story of Qatari flag by Tayseer Abdullah and Abdul-Rahim Al-Siddiqi, and directed by Nasser Abdul-Reda. The second is entitled “Housh Al-Bayt” by Saad Burshid, and deals with Qatari culture, as well as the “Hazawi” event presented by the artist, Hadia Saeed, which is heritage tales from the past, where she tells in an interesting theatrical style, stories from the Qatari heritage, as well as another play belongs to the puppet theater “Achieve Your Dream”, which shows how the family supports the ambition of its children.