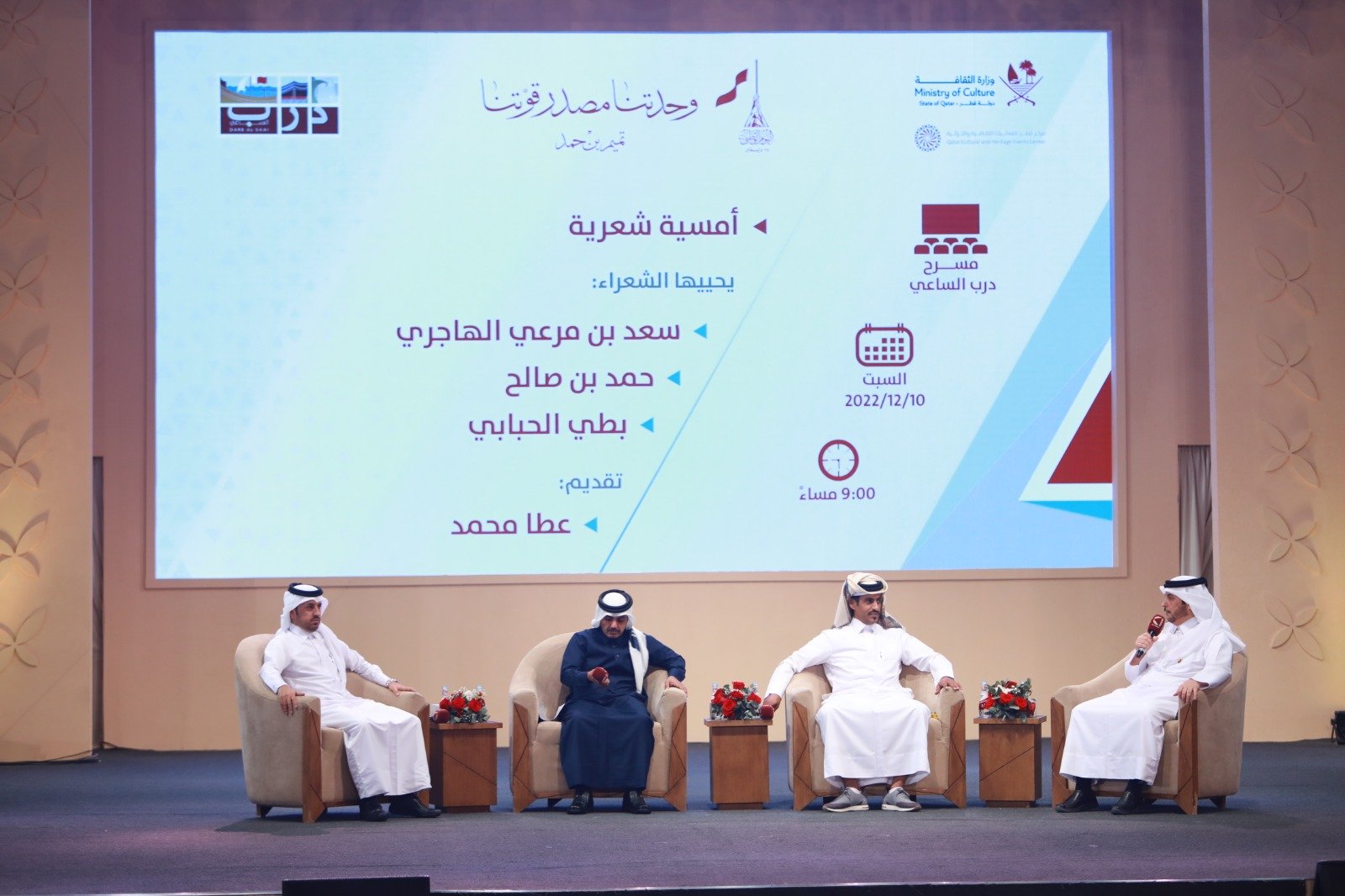 The Qatar Poetry Center “Diwan Al-Arab” concluded its poetry evenings at Darb Al-Saai, which came as part of the activities of the Qatar National Day 2022, where a poetry evening was held on the main theatre, which was performed by the poets: Saad bin Marei Al-Hajri, Hamad bin Saleh, and Butti Al-Hababi, and it was moderated by Atta. Mohammed.

The poet Saad bin Marei Al-Hajri expressed his happiness at participating in this evening, especially as it comes within the activities of Qatar National Day 2022. He said that this national occasion coincides with the State of Qatar’s hosting of the FIFA World Cup Qatar 2022. He continued by saying “I read a number of patriotic poems to welcome the guests of Doha during the World Cup, in addition to reciting other multi-purpose poems.”

He also stressed that poetry is the poet’s message to his society, and through it he sends many messages in the love of the country and calls for its advancement and keenness on its development, and also carries other societal messages urging morals to advance societies morally, intellectually and humanly.

On his part, the poet Hamad bin Saleh congratulated the wise leadership of Qatar, and everyone living on this good land, after the great achievement of hosting the World Cup 2022, as well as the celebrations of the National Day, and described his contribution to the events of the National Day as participating in an extraordinary national event, which is very important, and as poets our role lies in highlighting our identity, heritage, customs and traditions using our letters, words, and rhymes.  He was pleased to be a participant in the last poetry evenings of the Qatar Poetry Center “Diwan al-Arab”, under the Ministry of Culture.

He said: “I am proud of my homeland, the leader of the homeland, the people of Qatar in general for their attitudes and their support to they country’s leadership, hence my participation in this evening, to highlight the role and active contributions of poets. He continued: “The poet has a national and societal obligation, so that his poems must serve to convey the public’s concern, by supporting our homeland, and its leadership in everything that is in the State’s best interest, as well as by promoting loyalty and partnership. He emphasized that he had recited a number of his national poems, including the poem “Tamim Al-Majd”, as well as the poem “Amar Ya A’zam Watan”, as well as a number of other poems dealing with social aspects.

The media specialist Atta Mohammed said: “the evening reviewed the national poems index of the poet in an attempt to answer several questions relating thereto, including: Is the poet’s writing of national poems an indication of his affiliation? Is the poet’s devotion measured by the number of poems written? The extent to which the repetition of writing for the homeland affects other subjects addressed by the poet on different occasions. He added: “The attendees addressed the poet’s environment and its impact on their writings, and how the poet preserves and respects their environment and religion, customs, traditions and even accent through his poems, especially if his environment is essentially poetic.