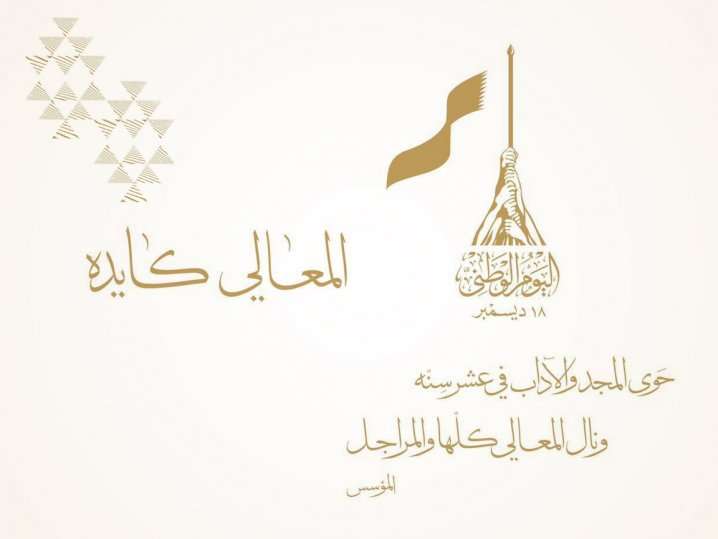 The Ministry of Culture and Sports today released the Qatar National Day 2019 slogan ‘Al Maali Kaydah’, which means that the path of excellence is difficult.

The slogan is inspired by a poem by the founder describing his son Sheikh Ali bin Jassim (Joaan) and gives a clear picture of a whole generation of Qatari youth in the founding period.

The slogan reflects the belief of successive generations of Qatari youth that the path of excellence is arduous.

The National Day commemorates the founding of the State of Qatar by the founder Sheikh Jassim Bin Mohammed Bin Thani on December 18, 1878, who laid the foundations of the modern state of Qatar, under whom Qatar became a single, coherent organic entity and an independent, unified country.

Qatar National Day marks the date of succession (December 18, 1878) of Sheikh Jassim Bin Mohammed Bin Thani, the founder of the State of Qatar, who ruled Qatar during 1878 – 1913.

He ran the affairs of the country along with his ageing father, Sheikh Mohammed Bin Thani, in 1876. Following the passing away of his father on 18 December 1878, he took over.

Sheikh Jassim Bin Mohammed Bin Thani was born around 1827 and was brought up in Fuweirat North East of Qatar where he learnt the Quran, its sciences, jurisprudence, Islamic law, the arts of equestrian, along with falconry and hunting skills.

The path of excellence is difficult

Obtained all excellence and manliness

In this stanza, the Founder Sheikh Jassim bin Mohammed laments his martyr son, Sheikh Joaan, and gives a glimpse into the truth of a generation of young people who grew up on ethics and knowledge and was brought up to search and acquire knowledge even if the price of that sacrifice was too expensive.

The Founder Sheikh Jassim laments his son, Sheikh Joaan, listing his virtues. He was a young man of age; a student of science and a strong knight and these are the values for which he had been raised in from the Qatari environment.

Sheikh Joaan and his generation of young people has been a model for the Qatari youth of this day, in acquiring ethics and science, and willingness to sacrifice for precious homeland Qatar by overcoming all challenges.

Throughout its history, Qatar and its people blessed with natural resources such ‘pearls’ which provided them with well-being and decent living. Also, their land was full with grass and water, and was blessed with oil and gas.

And, because the challenges are always there, Qataris have always been prepared for the challenges of life, from natural disasters or the economic challenges such as the Pearl Depression, as well as the military and security challenges from the Mesaimeer in 1851 until the siege of Qatar in 2017.

All the challenges have been linked to a common factor across successive generations and it is the readiness of Qataris, especially young people, to confront these challenges with two weapons: morality and science, above all else.

As an example and a historic testimony to these challenges, on 17th of Ramadan 1888, at Sheikh Ali Bin Jassim Mosque (Joaan) in the Eastern Palace, (the current National Museum of Qatar), while praying, where many Qataris were present for a big diving season, there came the news of a surprise attack on Doha and its surroundings.

Sheikh Joaan completed the Fajr prayer with a few people knights, proceeding in the aftermath of the invaders who had withdrawn to the Rawdat al Khayl, where the Qatari clashed with them and their number was double.

This was an important event in establishing our beloved State.

The path of excellence is difficult

The slogan is inspired by a poem by the Founder, describing Sheikh Ali bin Jassim (Joaan), and by that he is giving a clear picture of a whole generation of Qatari youth in the founding period.

The slogan reflects the belief of successive generations of Qatari youth that the path of excellence is difficult.