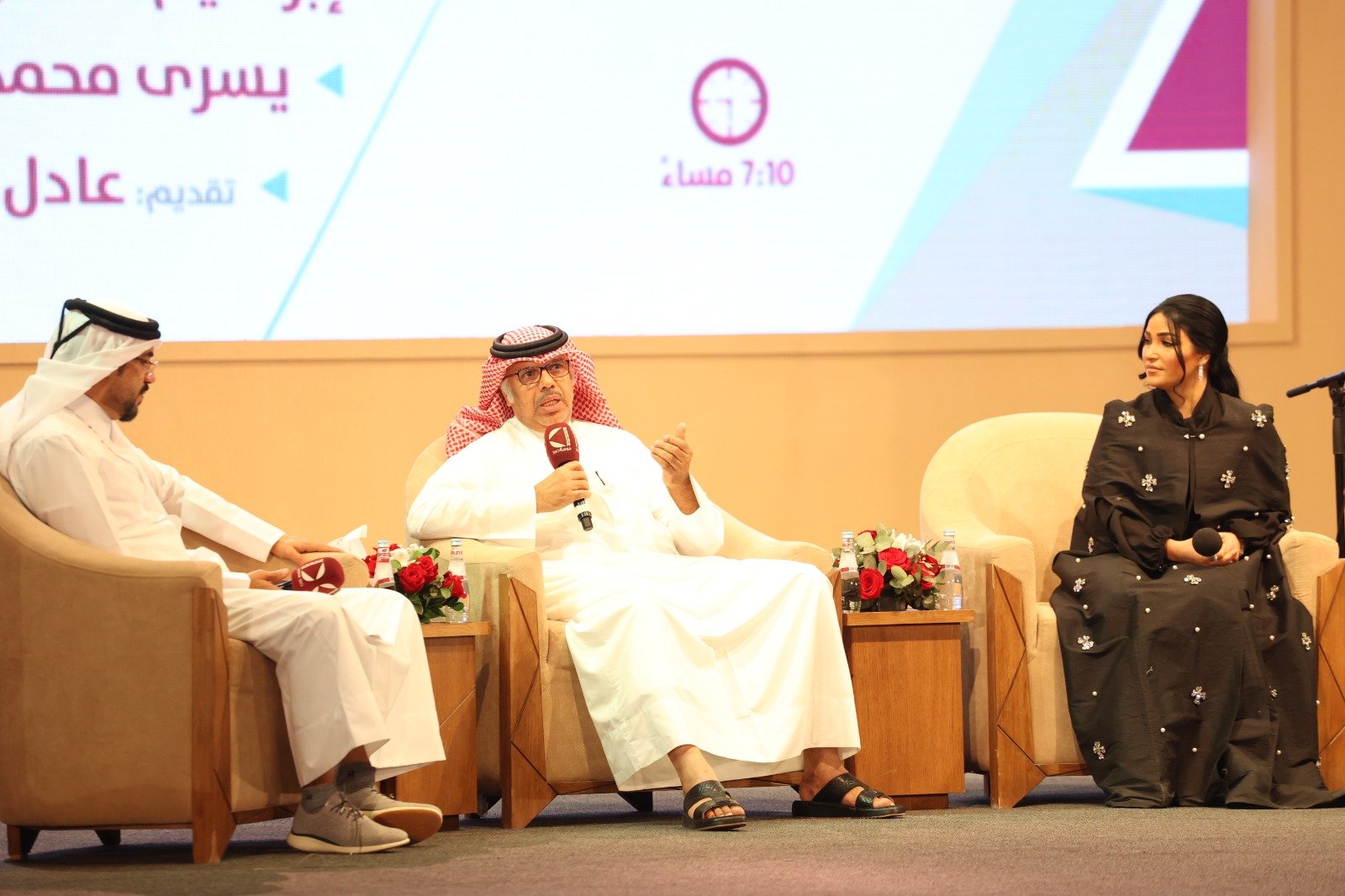 The main stage of Darb Al-Saai witnessed yet a new symposium, within the activities of the National Day of the State 2022, under the theme “Abdulaziz Nasser.. Dean of the Qatari Song”.

The symposium was attended by Ibrahim al-Mutawah, researcher and media specialist, Yousra Mohammed, a singer, and moderated by Adel Abdullah.

On his part, Mr. Ibrahim al-Mutwa emphasized that the late musician Abdulaziz Nasser’s artistic life spanned about 50 years, “it is the first spark that ignited Al-Adwaa band, and his first tune was for Palestine, and he was supposed to be presented in his voice, however the unfortunate events of 1967 (Al-Naksa) prevented it”.

He pointed out that the audience knew the late musician through the Qatari heritage, which he employed in his work. He stressed that a large number of Qatari singers sang to Abdulaziz’s music, such as Faraj Abdul Karim, Ali Abdul Sattar, Nasser Saleh and others.

He said “Abdulaziz Nasser linked his academic studies at the Institute of Arab Music in Cairo with his artistic talent, which produced pioneering works, and his company of Arab musicians in Cairo contributing to the spread of his music and work to include that with many Arab artists.

Mr. Ibrahim Al-Mutwa pointed out that the genius of the late musician Abdulaziz Nasser lies in his transformation of the song from a stereotypical rhythm to a song in which numerous verses are used, which gave the song a joy and a kind of long psyche, and they were suitable to present in any Arab spot, not just Qatari.

He added “the song “Allah ya Omri Qatar” is still a timeless song, sung by every Qatari and Arab, and so his works are graceful, daring and rebellious to the traditional style of the Qatari song.

He stressed that the company of Arab composers in Cairo inspired the changes he was able to make to  the Qatari song, and laid the foundations for it in terms of melody and singles.

He said: “The work of the late musician Abdulaziz Nasser preserved the spirit of authenticity, with his openness to contemporary music, which made his work reach everyone inside and outside Qatar, as he used the rhythm of “Al-Maqsoom”, as well as his employment of the art of sound and his presentation of the national song. He was keen on employing expressions that are specific to the Qatari heritage, as it shows in his national work. He stressed that his ability to employ Qatari and Gulf heritage made him reach the largest geographical area. He used the rhythm of Fujiri and was able to present it to the Arab listener, which means that he did not disguise Qatari heritage, but presented it to the Arab recipient in the best way possible.

He continued: “The late musician was inspired by the poetic vocabulary, and it had affected him positively, as he was known to be a persistent and hardworking artist who moved between more than one source to explore more vocabulary”.

The symposium included a number of works by the late musician Abdulaziz Nasser, including the songs “Allah Ya Omari Qatar”, “Ohebok ya Quds”, “Walhan w Musayr” and others. The symposium also included a recorded broadcast of the song “Umm Al-Hanaya”.