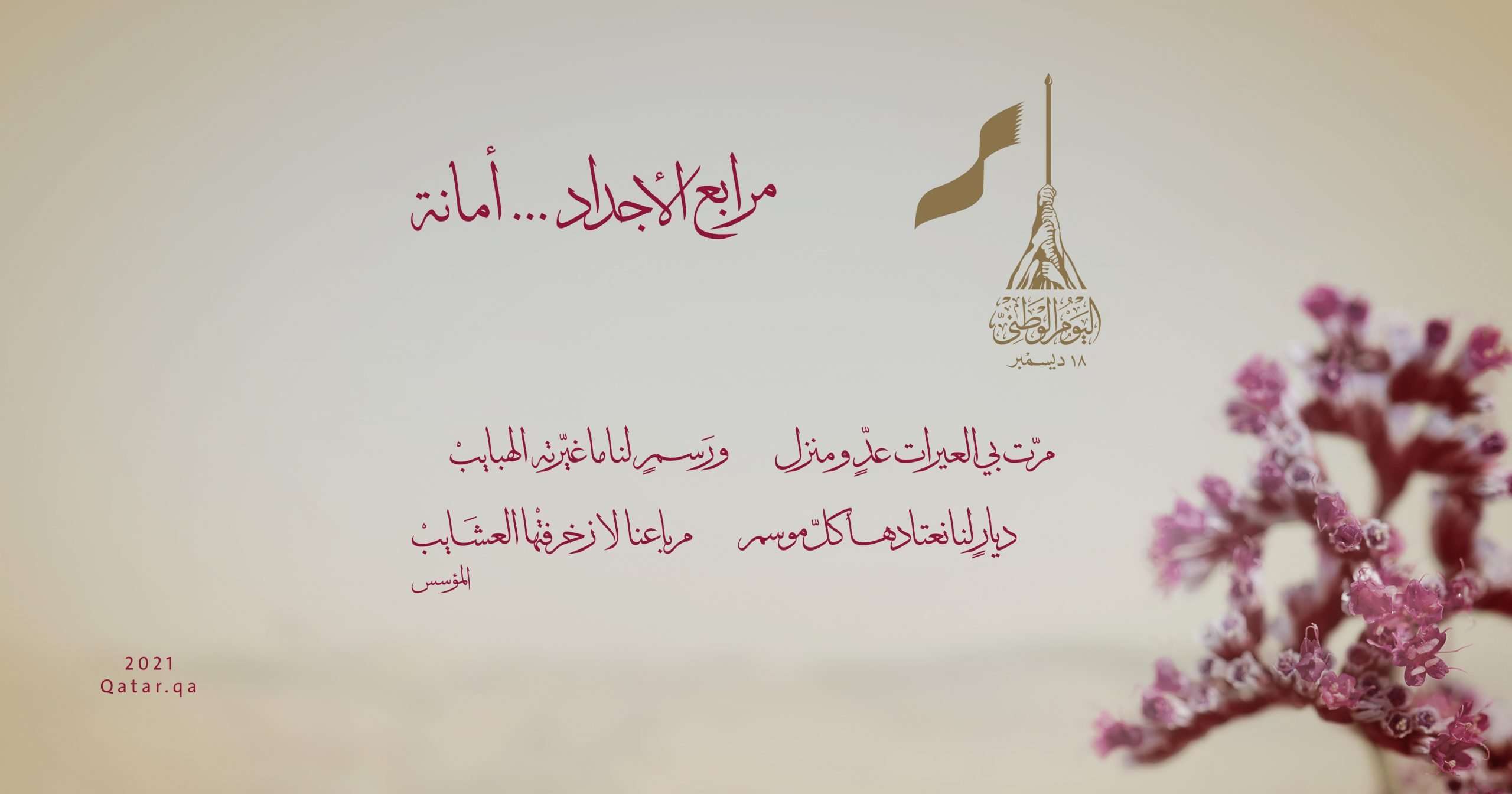 ANCESTRAL MEADOWS: A MATTER OF TRUST .. slogan for the 2021 Qatar national day

ANCESTRAL MEADOWS: A MATTER OF TRUST

The new slogan is based on the poetry of the founder of Qatar, Sheikh Jassim bin Mohammed Bin Thani, may Allah rest his soul, and represents the strong relationship of Qataris to their environment since time immemorial.

Oh, how many caravans have passed by,

Leaving behind vestiges of the fluctuations of the times,

Abodes our sights are accustomed to as the seasons slip by,

Our meadows ornamented with herbs.

Qataris have always been wise and courageous, believing that life is lived through interaction with others. They traveled in the land that Allah gave them, taking care of it without extravagance.

Their attachment to their environment increased their love for their homeland and their sense of belonging and pride in it, which is apparent in their songs and poems.

The 2021 National Day celebrations stem from our loyalty to the legacy of our forefathers in preserving the homeland, remaining ever grateful to Allah.

Minister of Municipality and Environment:

The State of Qatar pays special attention to environmental issues, emphasizing the importance of its role in providing a healthy life for all its residents.

ANCESTRAL MEADOWS: A MATTER OF TRUST

The new slogan is based on the poetry of the founder of Qatar, Sheikh Jassim bin Mohammed Bin Thani, may Allah rest his soul, and represents the strong relationship of Qataris to their environment since time immemorial. They were raised by the characteristics of the land, coexisting with its nature, the colours of its soil and sea, the seasons, and they explored its depths so that it formed their personality and identity.

The union of the sea and land reflects a special feature of this environment, intertwining the Qatari people with these two blessings and providing their livelihood. They would go to the sea to dive in the summer, and pasture in the winter. For pearls, they voyaged the vast ocean with wisdom and courage, and believed that life is lived through interaction with others. They welcomed ships from distant lands arriving at their shores with generosity and hospitality.

Despite the challenges of living in the desert with the scarcity of water and plantation, they found inspiration and insight, and were able to make the desert bloom with their patience. The beauty of their cultivated land increased their creativity and deep poetry.

The Qatari people walk the land which Allah has blessed and entrusted them with. They saw this blessing and vowed to take care of this gift, building their homes using stone and hide, all with deep rooted humility to reflect their appreciation of Allah. Their gratitude towards Allah was clear through their actions above their word.

The attachment of Qataris to their environment enhanced their love for their homeland and their sense of belonging and national pride. As such an important part of their lives,  the environment has been a central theme in their anthems and poems, such as the verse of Sheikh Jassim bin Mohammed Bin Thani that inspired the national day slogan.

His Excellency the Minister said: “With this distinguished beginning, Sheikh Jassim began one of his poems, and this is simply an example of the relationship between Qataris and their environment. This deep emotional dimension remains present in our lives, and it lives on in our relationship with the sea in summer and land in winter. This environment has not been held back on love or generosity to this day, and its provisions have reached all corners of the globe. There is no doubt that preserving it is the responsibility of all those who live on this blessed land, exchanging love for love. Our celebration of the National Day this year is inspired by our loyalty to the legacy of our forefathers in preserving their homeland, thanking Allah through their action above word for the cultivation of this gifted land. And with this, we will have rendered the trust to its people: the coming generations.”

(Care for the Environment)

In turn, His Excellency Abdulla bin Abdulaziz bin Turki Al Subaie, Minister of Municipality and Environment, said that the interest of the State of Qatar’s Ministry of Municipality and Environment, in environmental issues comes as an affirmation of the importance of its role in providing a healthy life for everyone living on its land, in line with the wise leadership’s interest in developing resources. The natural resources are guided by the Qatar National Vision 2030 and the development plans and strategies that have emerged from it, insofar as it has harnessed all its energies to work constructively towards achieving a sustainable environment, preserving and restoring ecosystems.

His Excellency added that the State of Qatar, under the wise leadership of His Highness the Emir Sheikh Tamim bin Hamad Al Thani, may Allah protect him, has attached great importance to the environment and sustainable development, represented in the inclusion of this field as one of the most important pillars of the Qatar National Vision 2030. To this aim, clear plans and programs have been drawn up to protect the environment and its natural balance, in order to pursue inclusive and sustainable development for all future generations.

The 2021 National day slogan comes within the State National Day Celebrations Organizing Committee mission to enhance loyalty, solidarity, unity and national pride, and emphasizes the values of the Committee, which include partnership, inspiration, creativity and transparency.

The slogan reflects the aspirations of the National Day towards long-term impact, not temporary excitement, and serves to highlight the role of national symbols, and influential members of society, by focusing on highlighting their principles and values, headed by the founder Sheikh Jassim bin Mohammed BinThani, may Allah rest his soul. It reflects the values of Qatari society based on Qatari society since its inception.

The slogan raises awareness of the younger generation about the meaning of loyalty, solidarity and unity and instils it in them through specific activities, introducing the authentic Qatari heritage and history, not reducing an era of history to a day of celebrations, but focusing on events of historical origins, to be directly linked to national identity and distinctive traditions, connecting us to the past. It reflects the values of loyalty, solidarity and unity in contemporary form, and embodies national concepts and values on the ground through specific activities, through the interaction of citizens and residents during the National Day of the State.

The meaning of Sacrifice and Redemption

The National Day is laden many implications of sacrifice, generosity and giving, as well as highlighting the meaning of pride, honour and national belonging. It is a commemoration of the founding of the State of Qatar by the founder Sheikh Jassim bin Mohammed bin Thani on 18 December 1878 AD. It is he who laid the foundations of the modern state of Qatar, uniting the country under his leadership, to become a single, cohesive and independent state.

The National Day of the State of Qatar creates an opportunity to magnify the glorious deeds of the founders of the State of Qatar, who endured difficulties and paid a heavy price to achieve the unity of their homeland. It emphasizes the identity and history of the state. It also embodies the ideals and hopes upon which the state was established, in addition to promoting loyalty, solidarity, unity and pride in the Qatari national identity. This instils and ignites a desire for everyone to celebrate the memory of these founders and evoke their ancient history.

December 18th is a day in which children and grandchildren remember the heroism and history of their ancestors and their role in building the modern State of Qatar. It is through their heroic journey that Qatar succeeded in achieving the unity of the nation and affirming its sovereignty, until now as a country that encourages intellectual renaissance.

Thus, this day reverberates with all the people of Qatar to express their feeling of love, pride, gratitude and loyalty to the State and its founding leader, Sheikh Jassim bin Muhammad bin Thani, may Allah mercy on him, and take an oath of loyalty and obedience to the leader of the state.