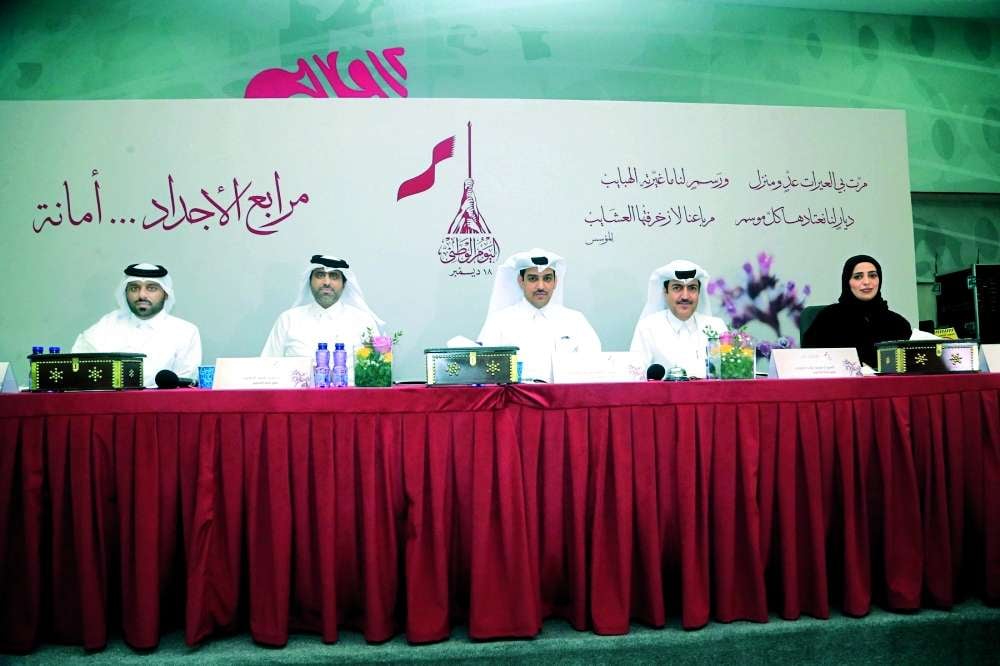 The Ancestral Meadows Event, held yesterday at the Women Sports Committee has witnessed fierce competition among the participating schools. The event was held in cooperation with the Friends of the Environment Center, with nearly 80 students representing 16 public and private schools participating in the preliminary competition. It is expected that 3 boys-only and 3 girls-only schools will be selected to qualify for the final competition, to be held on 14 and 15 December. The arbitration committee is made up of Ms Eman Al-Kuwari, Mr Mohamed Al-Khori, Mr Farhoud Al-Hajri, Dr Hareb Al-Jabri, and Mr Hamad Al-Bahr.

The meeting was aimed at promoting the national values of loyalty, solidarity, unity and pride in the Qatari national identity. It also emphasized the Committee’s values ​​of participation, inspiration, creativity and transparency.

The meeting comes within the framework of the Committee’s preparations for the National Day celebrations, which will be held this year under the slogan of “Ancestral Meadows: A Matter of Trust.” The slogan is taken from one of the poems by the founder Sheikh Jassim bin Muhammad bin Thani, may his soul rest in peace.

The slogan reflects the aspirations for the National Day that extend well beyond the QND celebrations themselves. It also highlights the role of national symbols in bringing together all members of society, by focusing on highlighting their principles and values, as embodied by the founder Sheikh Jassim bin Mohammed bin Thani, may God rest his soul.

Mr. Farhoud Al-Hajri pointed out that the event will hopefully lead to raising students’ level of environmental awareness and promoting environmental sustainability, based on the Qatar National Day 2021 slogan: “Ancestral Meadows: A Matter of Trust.”

Seven criteria will be used to evaluate students’ performance in areas of agriculture and recycling.

The top three will win prizes of 5,000, 4,000, and 3,000 Qatari Riyals, respectively, in addition to prizes to school supervisors whose schools make it to the finals.

The competition aims to instill the concept of trust between generations, guiding the younger generations towards better practices to preserve natural resources in order to consolidate the concept of environmental sustainability and to achieve the vision of Qatar 2030. It also aims to promote the Qatari national identity through preservation of religious and cultural traditions.